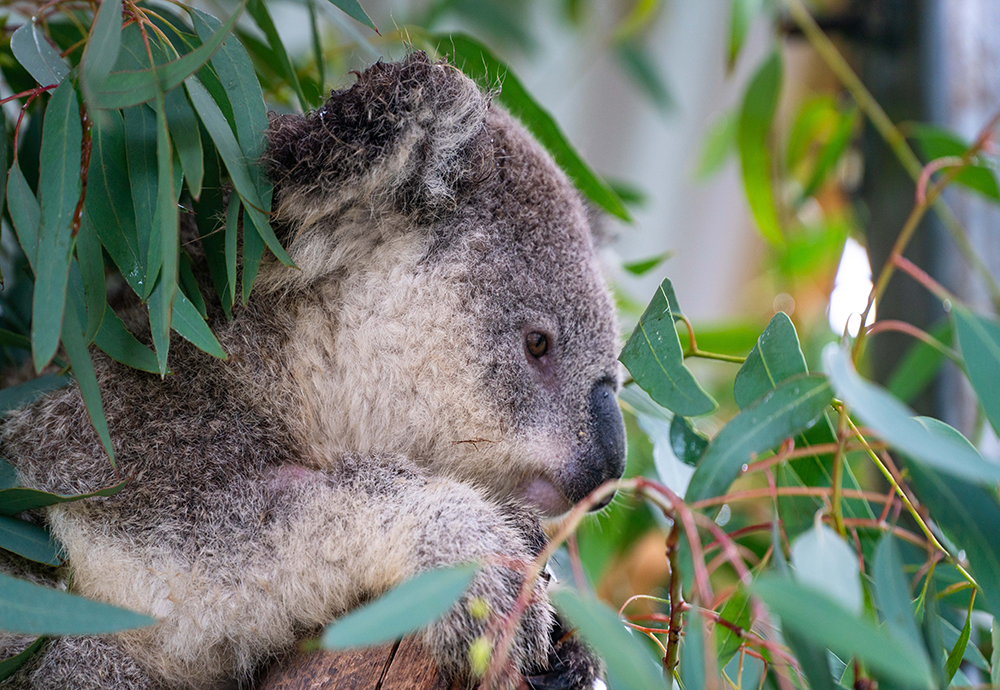 To mark the launch, a new YouGov study of 1000+ metro and regional NSW residents has confirmed awareness of koalas living near our towns and cities is critically low. With less than a third of residents (31%) aware that koalas live in neighbouring bushland in close proximity to busy residential areas in the Sydney Basin - from the Blue Mountains to Nowra. However, concern for their protection is high for the majority (84%) who believe koala habitat should be more strongly protected from economic activities such as urban development, mining and logging.

Jeff Angel, Director of Total Environment Centre, said, ‘’The study confirms most people don’t know they live in a city that neighbours endangered koalas. And yet, koalas are living in the forests around Sydney and in the region stretching from Newcastle to the Blue Mountains to Nowra, and are at risk from increasing urbanisation, mining and logging. This species has been listed as endangered by the Commonwealth and NSW governments and yet we have legislation on the table that is actively working to undermine their conservation. The new Network will pursue their protection.”

The Sydney Basin Koala Network aims to increase awareness of this iconic species through increasing public awareness with a variety of tactics, putting koala protection and associated issues on the state and federal agenda including citizen science, supporting community groups and working with a wide variety of stakeholders.

‘’The funding from WIRES is allowing us to mobilise resources to engage experts in the science, communications and legal fields; to progressively build a citizen science network; collaborate with and assist local, state and national NGOs; and inform communities about the fate of their local koalas. The next three years are critical as urban, mining and other developments threaten to clear critical habitat and connecting corridors,” added Angel.

WIRES CEO Leanne Taylor said, “WIRES is well aware that koalas in the Sydney Basin are under threat - year after year we are responding to more calls to rescue injured and orphaned Koalas. The impacts of the 2019/2020 Black Summer Bushfires once again raised the alarm that the remaining healthy colonies of koalas need to be protected if they are to survive and repopulate the regenerating forests. The chlamydia free status of these koalas makes them critically important to the long term survival of the species in Sydney’s Basin. We hope that combining the resources of WIRES and Total Environment Centre will lead to a safer future for these Koalas.”

Jeff Angel added ‘’We want to work with all stakeholders – government, private and community – to establish a sustainable consensus that the Sydney Basin’s Koalas and the plants and animals they share their home with, are a precious part of our stewardship for present and future generations. We will be issuing an annual report card on the progress of Koala protection.”

● Whilst most (81%) NSW citizens aged 18+ say that koalas live in bushland, less than one in three (31%) are aware that koalas reside at the edge of their cities or towns City dwellers are less aware of koalas living in neighbouring urban environments than those in regional areas (27% vs 40%)
● Lowest levels of awareness were with younger residents; just 16% of those aged 18-24 were aware of the close proximity of koalas to the city than older residents 50+ (36%)
● Respondents residing in the Sydney Basin area are less likely to say that koalas live on the edge of their cities and towns (27%), compared to those residing in other parts of NSW (40%).
● Over four-in-five (84%) NSW citizens say that koala habitats should be protected from development (including housing, mining, logging, and more). Just one-in-ten (10%) support the use of koala habitat
● Asked about their views on the amount of native forest conserved for koala habitats, two-thirds (64%) say that it is ‘too little’ – this is especially pronounced for respondents outside the Sydney Basin region (70%, compared with 62% for Sydney Basin respondents).
● Three-in-five (62%) say that property developers, logging and mining companies are given “too much” power over land use in natural forest.