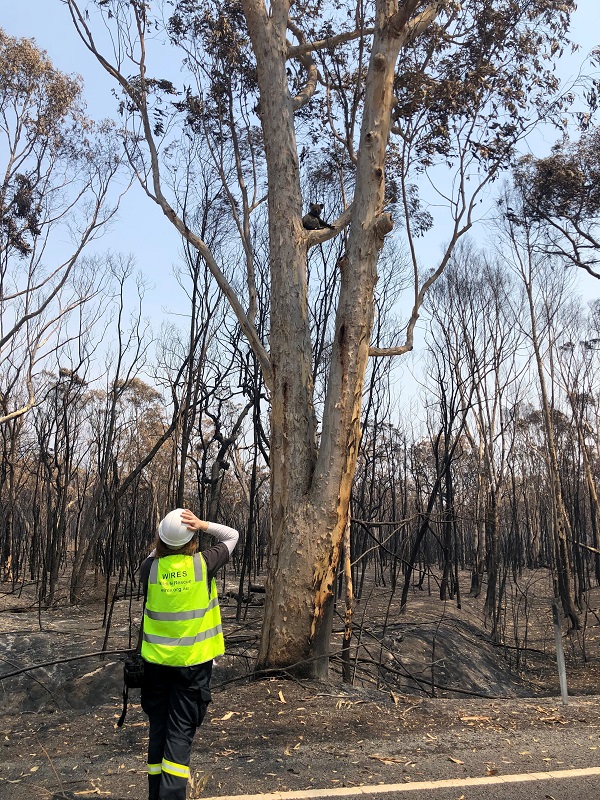 Only weeks into this year's fire season it is already believed to be the worst on record. Lives have been lost, hundreds of homes have been destroyed and there are still over 150 fires burning in NSW alone, dozens of them uncontained.

Over 1.6 million hectares of land have already been destroyed and it is estimated another 1.3 million are still burning. With such mass decimation of land, it is impossible to comprehend the number of native animals killed and the associated obliteration of biodiversity.

Tragically the fires come on top of one of the worst droughts in history and the combination of natural disasters is even more devastating for wildlife. Many native animals will have perished in the fires, others were struggling prior to the fires with starvation due to the drought. Surviving animals are expected to face ongoing struggles, caused by food and water shortages and lack of habitat, for an extended time.

This koala was spotted during search and rescue operations in Wollemi national park. As Tree Serve crew members assessed burnt and potentially dangerous trees they spotted a koala on the ground. As they approached he climbed the only surviving gum tree in a completely blackened area.

Some of WIRES team searching for wildlife on a nearby property were notified, and when they arrived the male koala was 10 metres high. With the help of the Tree Serve crew and their cherry picker, the koala, named Odin, was rescued from the tree and taken to North Richmond vet for urgent rehydration.

Odin was weak, dehydrated, covered in ash and had burns on all paws. Now in the care of WIRES volunteer, Alison, she is working with local vets to provide him the best care possible. We do not know yet if he will be strong enough to recover but he is receiving the care needed to optimise his chance of survival. Of the fire ground Kristie, WIRES Campaigns Manager said "It was an overwhelming experience to see not only the direct impact of the fires but the long term devastation caused - so much habitat, shelter and food has been lost. The fire zone is a very eerie place, the smoke significantly decreases your visibility, it is hot, silent and everything is a shade of black."

Fires present a significant risk to the safety of volunteers and emergencies like these place additional strain on our limited resources. As soon as WIRES is allowed safe access to fire grounds, our volunteers are doing everything they can to minimise suffering and rescue affected animals as quickly as possible.

On top of the fire and drought related rescues WIRES' rescue team and volunteers are responding to hundreds of daily calls for help. WIRES Rescue Office received over 19,000 calls in October alone, over 1,000 more than the year before and the majority of callers were seeking rescue advice and assistance for sick, injured and orphaned wildlife.

Unfortunately, the Bureau of Meterology (BOM) are also predicting a difficult summer with ongoing fire threats and extended drought conditions likely, due to expected drier than average conditions, below average rainfall and higher than average temperatures.

Many members of the community have contacted us to express their concern for wildlife and asked how they can best assist. The 5 options listed below are the best way to assist:

If you live in or are travelling through an area affected by a fire please make your personal safety a priority. Bush and grass fires often cross roads and highways, smoke can reduce visibility and roads may also be closed without warning.
Please make sure you have all the information you will need to keep safe.

WIRES are incredibly grateful to all the individuals and organisations that have offered their support. One of the organisations we would particularly like to thank, as they have been helping WIRES rescue wildlife 365 days a year for over 5 years, is xMatters. With their help we are now working on a range of rescue process improvements and new initiatives that will make it possible for more volunteers to be efficiently involved in rescue than ever before.